We wanted another Sharp Practice as we were starting to get the hang of it. As my Sikh Wars project is progressing we decided this was an ideal opportunity to get them on table and try different troop types. 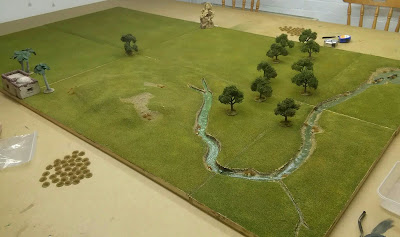 We would use deployment markers for the first time now we had the basics and the Sikhs would have a movable deployment point. Sikh deployment was the Ganesh statue whilst mark had an adobe house for the East India Company troops. 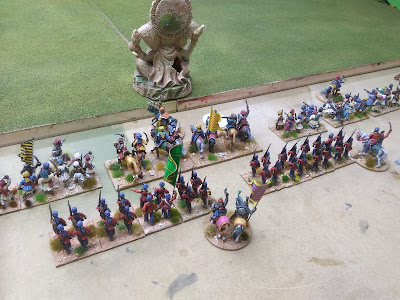 Chris Flowers and I commanded the Sikh forces. I had two units of regulars with a level 2 commander, a unit of 8 horse and a unit of 12 swords men all with level ones, Chris had the other two regulars and two irregular matchlocks all with level ones. The regulars had first fire and the sword and spear men had step out on one card. All the Sikhs were poor shots.

76 Sikhs vs 53 company troops but the company had a clear advantage in quality and a gun. 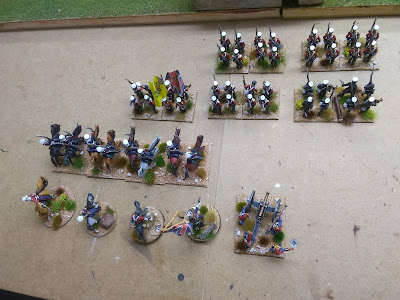 Move one and the Matchlock men and irregular cavalry deploy whilst the Dragoons, Bengal horse gun and Sepoys do the same and the movable marker is deployed 24 inches to the right in our woods. 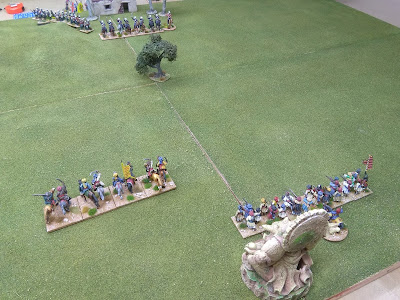 Next turn and almost straight away the cavalry are a each other. The British have the advantage of troop quality and a better commander, I have a slight advantage of moving more quickly as I was charging and they were trotting. 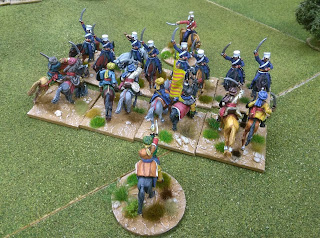 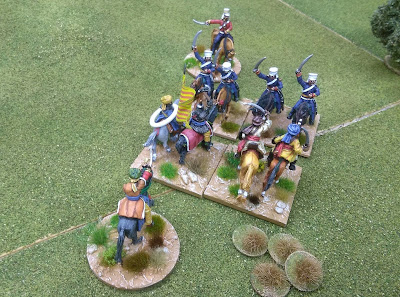 Happily I roll a six! Mark chuckles and shakes his head. 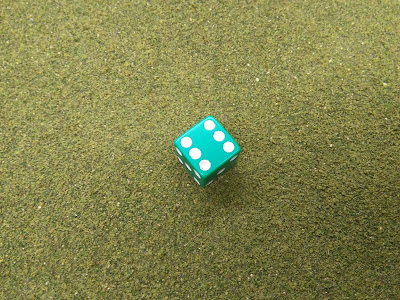 Next out Marks Dragoons charge again and destroy my cavalry but not before I inflict one more casualty on him leaving just three dragoons. 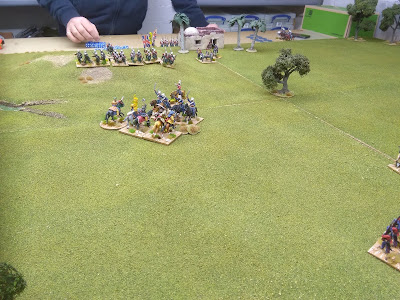 Meanwhile the gun opens up and Marks remarkable dice smash into Chris's Matchlock men inflicting 7 shock. The return volley whilst rolling great dice are all saved by Mark.

The final salvo of this turn and Marks Sikh regulars volley the remaining Dragoons and destroy them. I am reasonably content to have sacrificed my irregular cavalry to see off Marks Light Dragoons. 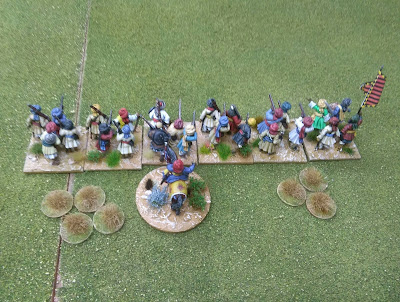 A second move for the deployment marker sees it a further 12 inches into the wood on the right flank and we now deploy the sword and spear unit still hidden in the wood, Chris's Sikh regulars move one and open a long range volley onto Marks Sepoys inflicting a couple of shock markers. 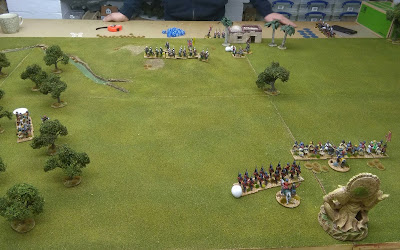 The return volley from the Sepoys does slightly more damage to Chris. 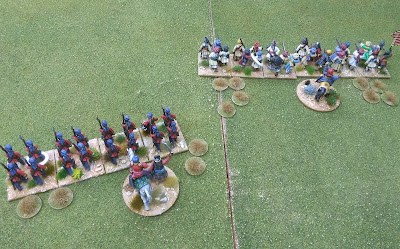 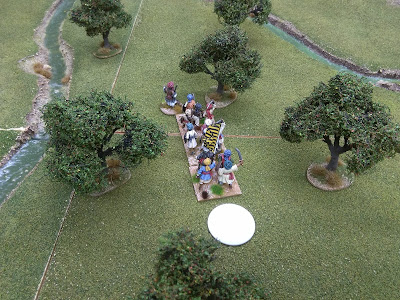 The Sword and Spear unit start moving to outflank to Company force, meanwhile Marks British Regulars finally enter table and take up a line to defend the hill against anything from the deployment marker in the woods. 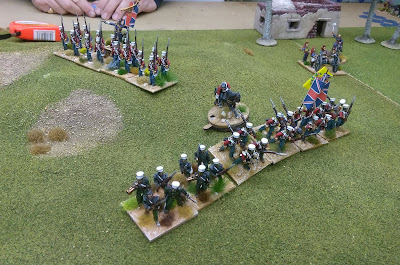 The British deploy just in time as my Sikh regulars (the only Sikh unit with a decent commander) deploy and then move straight up to the edge of the wood., we are enfilading the Sepoys which would mean double shock when we fire so Mark sacrifices his firing this go to pull his line back a little and protect his troops. He ever so slightly block s a couple of the British troops in doing so.

My volley into him inflicts 3 casualties and 8 shock, the first volley is always devastating, but if he hadn't moved it would have been 16 shock! 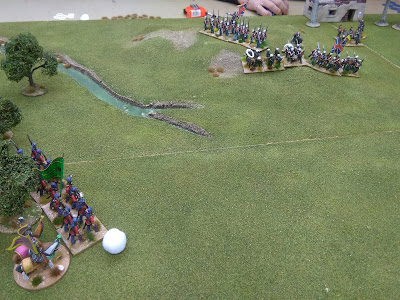 The Matchlocks fire at the guns again and Mark saves all of the hits AGAIN! 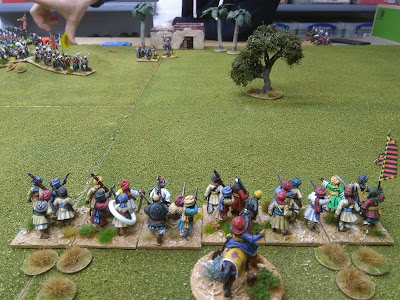 No such luck for Chris as the gun inflicts more punishment on his irregulars who now have 4 dead and 8 shock. 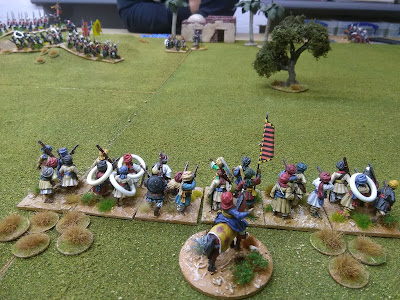 Next go and my Sword and spear unit appear on Marks flank forcing him to wheel his British, both the British and Sepoys are out of arc so I take the opportunity to reload and advance closer to them. 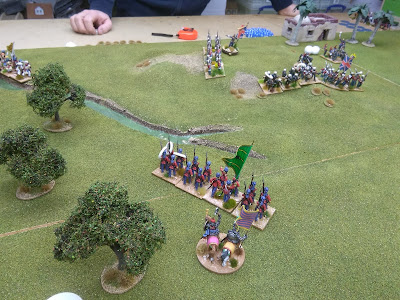 Mark responds by pulling his Sepoys back. Chris has finally got two casualties on the gun and a minor respite as it has two actions of re-loading to do before it can fire again so no firing this go. 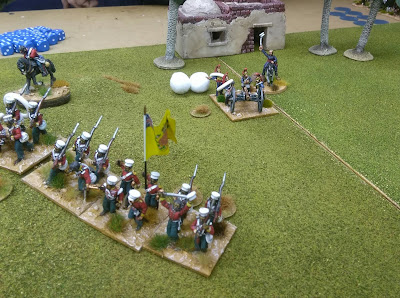 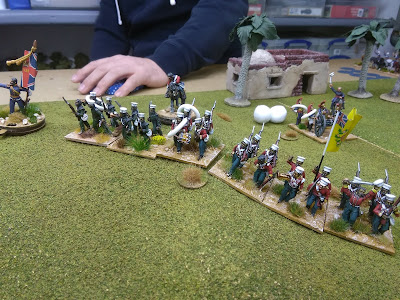 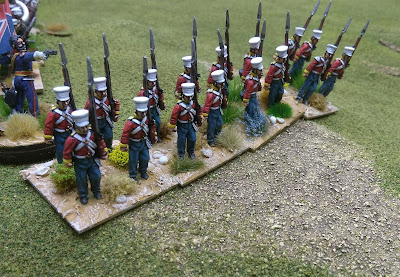 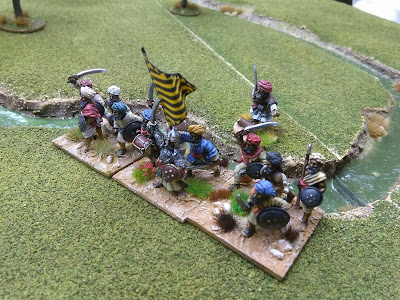 This Studio miniatures "Flashman" is a gorgeous figure, I have another one painted as Lancer officer with his horse shot from under him. Odd how the Studio figures range from absolutely fantastic, through nice to pretty awful, most of these last are discontinued now. 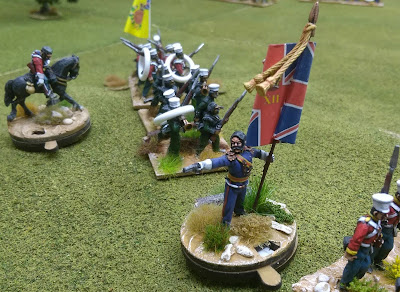 My regulars fire an enfiladed volley into Marks British inflicting a few casualties but not enough. My Sword and spear men have taken three moves, using a card for a bonus movement, onto the flank of the British where they cant fire on them. 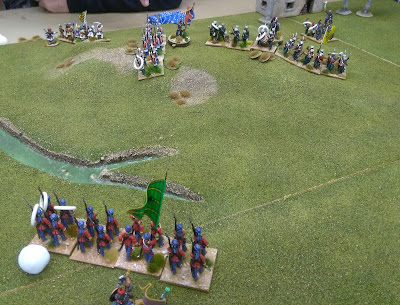 A return volley from the Sepoys drops plenty of shock onto my guys. 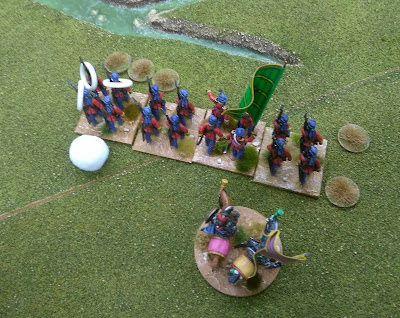 With time nearly out Marks British regulars led by screaming Flashy himself charge my irregulars and break them. A bad roll from Chris also sees his matchlockmen run out of ammunition. 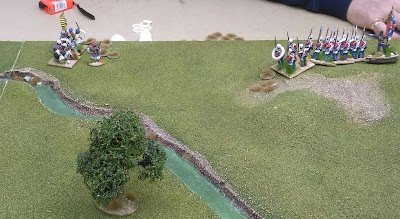 We now have 4 groups of damaged Sikh regulars left to attack 2 British and 3 Sepoy units along with a horse artillery gun defending a hill. Its a none starter, Chris and I accept defeat with quality winning out over numbers (and Marks awesome dice rolls) 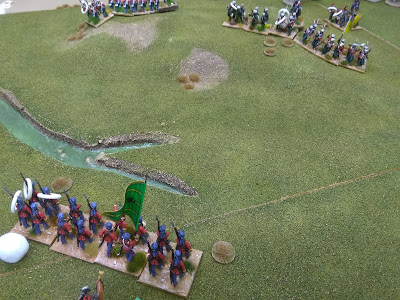 Its been a massive boost for me to get the Sikh Wars collection on table, it's also been a really instructive run at the rules and a thoroughly enjoyable game, thank you very much Mr Shann for putting this on for us.