Helions The Swedish Army. In The Great Northern War

I picked up the new Helion book on the Swedish army recently. I had heard some great reviews of the Russian Army for the same period so was quite excited to pick this up.

At first glance a couple of things struck me, nice colour plates, more than you would usually get in an Osprey for instance, a nice uniform guide covering most of the major Swedish units of the war. At 101 pages it is however about half the size of the Russian book which is a shame, they could have done a lot I think with another 100 pages, that said it is about double to pages of an Osprey so still good value.

There are stacks of maps, photos and illustrations to help the reader get a sense of the narrative, the maps being particularly useful. 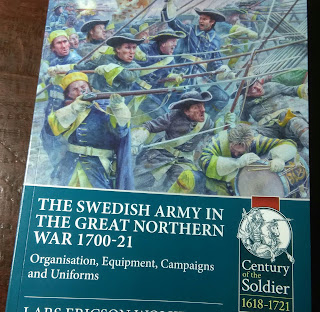 The uniform plates are really nice and broken down into sections for Guards, foot, horse and artillery and give a good flavour although not really going much on the changes during the 21 years of war. Minor criticism here is the Lifeguard of horse, all the images I have seen including the uniform guide in this very book show light blue faced in light blue, however the plate in this book then shows a mid blue the same as all the other units, bit odd, frustrating but minor criticism I guess. 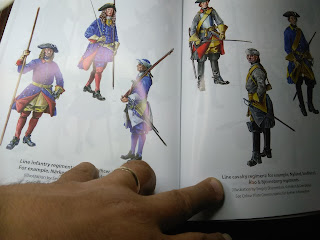 The uniform guide is great, just what you need as a modeller or figure painter, I will probably find this quite useful. 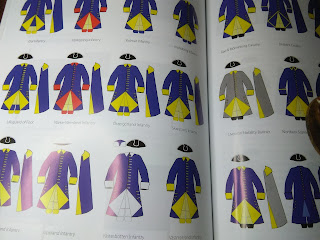 The actual narrative is for the most part interesting and useful, the history and stages of the war are quickly glossed over and could have been given more meat on the bones for me, the author splits the war into pre-Poltava and post-Poltava which makes sense and works. He goes on to then describe a couple of major battles and a campaign to discuss how the Swedes actually fought, this is interesting with some insights into battles I hadn't previously realised, but we could have added a number more battles and campaigns to make this a much rounder and more interesting section.

There are sections on the organisation, training, weapons and battlefield performance of the Swedes as well as a section on fortifications. The interesting point the author makes a couple of times is that contrary to popular belief the Swedes did not have an aggressive tactical doctrine that other nations didn't, they just were better trained and led and able to implement aggressive tactics that other countries couldn't. Food for thought there.

The author also has a 4 page section on the parallels to be drawn between the Great Northern War and the War of the Spanish Succession which occurred at about the same time in southern and western Europe. I am not sure that I got anything at all from this piece, other than discussing that the Swedes had officers serving in the French army and may have used plans from the battles and sieges there is no real discussion about how it might have been used, how tactics and strategies were similar or different etc. I was a little confused by this whole section, the conclusion was that we don't know what they learned or implemented, if that's the case why waste 4 pages discussing it?

My biggest criticism would be the editing, some of the wording is poor as is to be expected for an author for whom English is presumably a second language but there are lots and lots of silly errors. A line that says Peter the Great was invading Russia when it was clearly meant to be King Charles, many other parts could have been made much easier to read with a little decent editing of the original, its a shame as there are small sections on almost every page I had to read two or three times to check what the author was actually trying to tell me. For the most part these were very minor errors but frustrating, if I can see them surely the editor can?

So taken as a whole an interesting read and worth the £20 or so, useful to anyone new to the period and the Swedish army, less so to anyone who has read a great deal about the conflict. It doesnt for instance stand up in comparison to the Great Northern War compendium, but then its not supposed to.

So hopefully an useful review for anyone thinking of getting it, bottom line knowing what I know I would still probably buy it if I had the choice again.
Posted by RogerC at 02:27

Email ThisBlogThis!Share to TwitterShare to FacebookShare to Pinterest
Labels: GNW